Although quite obscure in-game, the Zuiun (along with the Mitsubishi F1M2) represented the pinnacle of Japanese floatplane development. This was a result of Japan's obsession with multi-role floatplanes which arose from battles with Chinese forces during the 1930's. It was initially intended to be carried by cruisers and carry out preemptive strikes on enemy aircraft carriers to secure air superiority, as the Japanese Navy disliked placing reconnaissance aircraft on aircraft carriers, which took up valuable space needed for fighters and attack aircraft (this was the reason that the Mogami was fitted with a floatplane deck). The Zuiun was equipped with 2x20 mm guns, 1x13 mm gun, and was able to carry a single 250 kg bomb. It was also fitted with dive brakes similar to the German designed Ju-87 Stuka. Moreover, it could fly as far as Zero fighters (about 2500 km), and was ridiculously fast as a floatplane at 448 km/h. Like many other Japanese aircraft, it never saw its full potential exhibited as a result of a delayed development schedule and Japan's dwindling production capabilities as the war progressed. 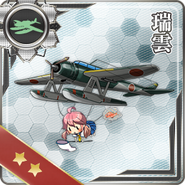