[Expand all] [Collapse all] [Toggle all]

1. Upon selecting a difficulty level, a new crafting quest will become available. This crafting quest will involve having a certain number of Development Material and a required aircraft in the player's inventory, and then scrapping a Type 0 Reconnaissance Seaplane, which will consume both the aircraft and the development materials to create a Saiun (Disassembled for Transport) item. The exact requirements of the quest differ depending on the chosen difficulty level.

The quest can only be performed twice before it disappears, however it will reappear if the player loses a disassembled Saiun.

2. The disassembled Saiuns must then be equipped on any of the following ship types:

3. Once the fleet sorties to E-3 they must reach Node E, the designated transport drop-off point, where any disassembled Saiuns being carried will be consumed.

4. The fleet must then attain at least an A-Rank victory against the Heavy Cruiser Princess

boss node at Node I, which if successful will deplete the TP gauge. If a victory against the boss is not secured, the player retreats, or the fleet is routed to a dead-end, the TP gauge will remain untouched and the disassembled Saiuns will be wasted.

Once two disassembled Saiuns have been delivered, the transport gauge is removed and replaced with a boss health gauge, along with a secondary starting point appearing and and two airbases for Land Base Aerial Support becoming available for use.

There are five special boss mechanisms on this map.

Once the last kill phase (the bosses' health gauge has dropped to or below the bosses' individual health) has been reached, a new mission will appear which can be completed to initiate a debuff on Abyssal Twin Princesses. 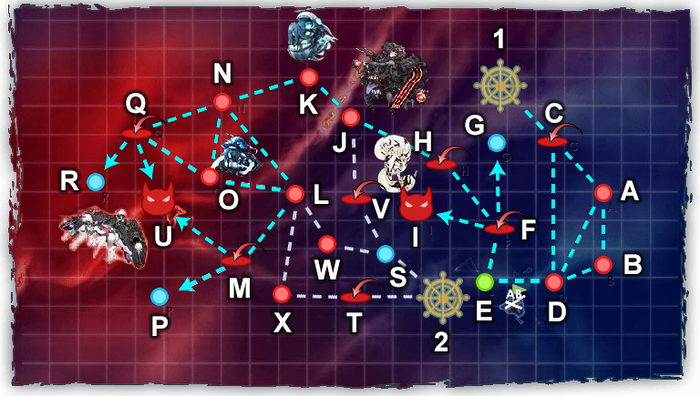