Common during most events

Check if you fulfilled these requirements if not you can't sortie event maps!

Special for this event

Note that on E3, the transport loadoff has its own dedicated route and boss node, so players can keep farming here without resetting the difficulty as the boss gauge will not be reduced after TP bar is depleted.

For more information about the mechanic, see Events#Difficulty Selection.

Starting from Winter 2015 Event, players can choose from the difficulty they want to play on each event map among three available difficulties: Easy (丙), Medium (乙), and Hard (甲).

You need to have a HQ level of 35 for Medium and 80 for hard. Different difficulties yield different rewards with harder ones either giving more items or a better version of the same item. However, ship rewards are always given regardless of difficulty. Drops also differ with some ships available only on medium to hard maps, and drop rates for some ships are statistically better. Enemy compositions also differ with bosses and their escorts are usually weaker on easier difficulties. To finish the next map on Hard, you will need to finish the previous map on Medium or Hard.

Clearing the last map on Hard (甲) mode will reward a First Class Medal. It is not required to clear all maps on hard but to gain access to last map's hard difficulty, you'll need to clear the pre-final map with Medium or above.

Red gauge HP is known to be different for different HQ levels as shown in the following table. This was also the case for last Summer and Fall events, however, the exact mechanics is still unknown, the level brackets are assumed, consider adding your HQ level in a tooltip or wikitext comment.

Refer to this link for more information.

Right before the event start, there's an interview on Comptiq which mentioned slightly more about how to kill them.

The information on the latest Comptiq interview is:

However, unlike the previous event where killing PT Imps prove to be quite a feat, PT Imps in this event are mostly easier to be dealt with, as long as you have the appropriate ship and equipment to kill them.[citation needed]

Starting from Winter 2016 Event, the event maps may have multiple starting points which leads to different routes, or even a completely separate routing altogether, and these fleets may encounter entirely different enemies on the way. The starting point of the fleet are dependent on type and composition of the fleet chosen to enter the maps. 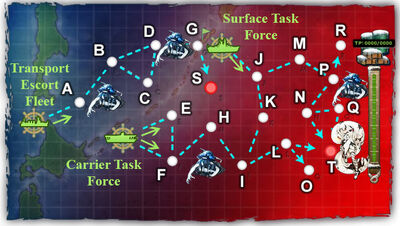 As you see in the image, there are 3 starting points and 2 ending nodes in E-3 map. The first part is to deplete TP gauge by using a Transport Escort Fleet which starts with node A and ends at node S. And after that the players have the option to use either Surface Task Force (starts with node J) or Carrier Task Force (starts with node E or F) to make their way to the final boss (node T).
back to top
Retrieved from "https://kancolle.fandom.com/wiki/Winter_2016_Event/Mechanics?oldid=630881"
Community content is available under CC-BY-SA unless otherwise noted.