For this map, our Quick Response combined fleet was optimized for ABFHK route. Sometimes, we head CEFHK instead, hitting an extra fuel maelstrom node at E. Our main fleet consisted of 3CV 1FBB 1BB 1CAV, the second fleet consisted of 1CA 1CL 4DD. We utilized a variety of carrier techniques in this battle and made the changes at the last dance since we had studied ahead of time the enemy patterns we would be facing.

For the three boss kills, we ran with high emphasis on opening airstrike and overwhelming carrier shelling power, the load out of our carriers were:

Hiryuu has high innate firepower, allowing her to deal significant amount of damage with only Egusa. Additionally, her 3 plane slot is ideal for Fleet Command Facility as it has very little effect on her performance. Knowing the formula for calculating carrier shelling damage does not take into account of number of planes in slot, Kaga took two Suisei Model 12A on her smallest and second smallest slots.

The damage of opening airstrike, however, is affected by plane count. However, we need Kaga's largest plane slot for Reppuu (601 Air Group) and since she had already had 2 shelling planes, we put the Tomonaga Squadron and Ryuusei (601 Air Group) on Shoukaku instead. Shoukaku's evenly distributed plane slots fared better than Kaga and allowed more blue planes on her two medium slots. A Type 2 Recon Aircraft to further boost the opening airstrike on her smallest slots. All other slots are filled with Reppuu to achieve air superiority (AS) in every node.

Things changed a bit for the final battle as there are now two Wo-class flagship Kai at boss. The fighter power required to AS becomes 306. Since we would be facing even tougher enemies, we needed concentrated shelling power. So for the last run, the load out became:

Kaga became unable to participate in shelling but Hiryuu got an extra firepower boost necessary to cripple a Wo-kai or battleship at boss. Shoukaku carried the same general load out for opening airstrike and shelling power. With this set up, we relied heavily on the fact that Kaga would not get hit since we would lose air control without Kaga. Shoukaku was more expendable; we would be able to at least air parity with only Hiryuu and Kaga.

For the final run, we ramped up the scale and replaced Nagato with Yamato in fifth slot. The set up was AP shell, 51cm cannon, 46cm cannon, and Obs plane. The FBB in fourth slot was Kirishima and she had a more accuracy-oriented load out with FuMO25 Radar and 2x 41cm cannon

Fleet Command Facility was an invaluable asset in this map. BB-hime pre-boss was especially merciless and we had to pull damaged ships out this way to get our boss kills. Since FCF uses the undamaged DD from top down, not counting the flagship of escort fleet, Shimakaze was positioned in second slot. She has high evasion, expendable and can tank hits if necessary. Shigure and Yukikaze were vital in our night battle fleet as we would rely on cut-in to bring down 170 armor boss. Yuudachi was the next tow ship should something happen to Shimakaze.

The brainstorming was definitely worth it, we wiped the floor with boss fleet, final form, in day battle. AA cut-in from Yuudachi suppressed Wo-kai's airstrike. Both Late model DDs were sunk and Ta-class suffered light damage in a type-2-recon-contact bombing. Nachi double-attacked and crippled a Wo-kai. Our light fleet whittled down the other to medium damage in torpedo phase. Yamato crippled the light damaged Wo-kai, Hiryuu shelled Ta-class to smithereens and finished off the other Wo. Yamato added another shot dealing 100+ damage to boss before night battle. With star shell and night scout triggered, Shigure cut-in the crippled Wo-class, Nachi and Sendai finished off the boss before Yukikaze even had a chance to say "sha-sha-sha".

While this seems straightforward enough, the fuel maelstrom costs two-battle-worth of fuel so the fleet would end up at BB-hime node with less fuel compared to ABFHK. Since fuel affects evasion and lowered evasion spell trouble against BB-hime, we opted for another battle to have higher fuel level at BB-hime. 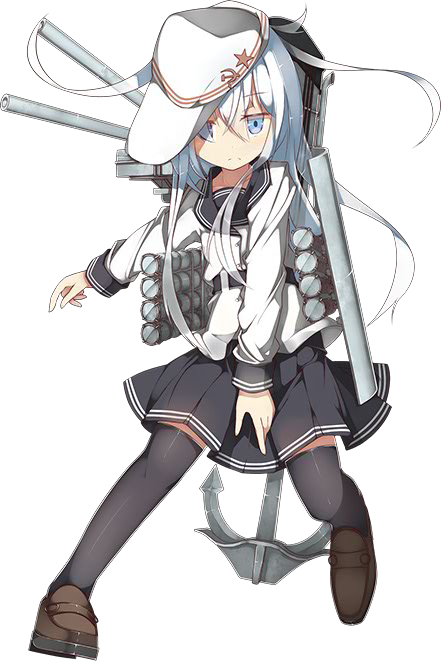 Admiral, Верный is in charge today. I'm fine, Спасибо
A great battle is upon us. Comrade Haruna, is the camouflage ready?
Retrieved from "https://kancolle.fandom.com/wiki/User:Fujihita?oldid=223817"
Community content is available under CC-BY-SA unless otherwise noted.