Sortie
Straight up night double attack setup for elite DDs, damecon on Mutsuki and Kisaragi along with boilers. Flagship carries Searchlight. Kirasagi sank at boss and expended a damecon but they managed S-rank victory and quest clear. Sparkling is not necessary for weaker DDs but it is recommended for stronger ones
A long list of newcomers in this event: Suzuya, Akizuki, Akigumo, Prinz Eugen, Nowaki, Hayashimo, Harusame, Ooyodo, Naganami, Asagumo, Maikaze, Taigei, extra Maruyu and extra Mikuma.
In general, the event is one of the easier events—although, personally, not much can be said since it is our fleet's first major event. There are a lot of says go into the second, E2, and the fourth map, E4, since they gave us the most troubles. E1 was a give-away map and E3 could be cleared easily, but not quite as farmable as E2 or E1.
Strategy involves a sacrificial ship carrying Type 0 Seaplanes, attempting to gain a successful recon check. Around 47-54 effective LoS is recommended.

Weakest ship in the fleet was Satsuki, level 30-, unmodernized. She went into the red a lot of times until we realized the "actual" effect of Searchlight in event was making the ship carrying it fall to lower priority on the Abyssal's hit list. Admiral decided to take his chances and put nothing but Star Shell, Searchlight and damecon on Satsuki. It worked and somehow, she was no longer targeted by the enemy fleets. Repair cost dropped to about 2-3 buckets per run on average.
The strategy deployed in E2 was probably the most unorthodox, a fleet of Sendai flagship and 5 DDs: 1 elite, 2 combat-ready and 2 radar/searchlight mule. A pattern emerged from our map early clears and Admiral took note of a few things.

When improving your own strategy doesn't help, adapting to your enemy strategy will. So, Admiral devised a countermeasure according to the above:

With these latest adjustments, the ships that get moderately/heavily damaged after E2 shifted from slot 2 Yukikaze (almost always), slot 3 Ayanami, slot 6 Mochizuki to slot 3 Akatsuki (almost always), slot 4 Yayoi and slot 5 Mochizuki (less frequent). With the help of carrier support expedition, full torpedo bomber planes sinking 2-3 ships consistently at low cost, the outcome is more S-rank victories, which was good enough to farm there for 4 days straight, and more tolerable repair timers (since weaker and lower-leveled ships are focused).

Bucket loss ranged from 1-3 buckets per run in comparison to 3-5 bucket loss in the original fleet composition.
This map was serious business without Akitsu Maru. Southern route had a chance of going north, into the storm and to an extra pre-boss battle. Nothing screams "Highway to oblivion" more than 4 battles (two pre-boss fights versus Ta-class flagship, Wo-class flagship II and a Ru-class flagship x2 battle) and an ammo-sucking maelstrom before event boss fight.

The main problem with pre-boss south and boss itself was the formation: Diamond. Maximum flagship protection and with Late Model Destroyers as meat shields, first fleet had a lot of trouble hitting important targets. Even hitting the destroyers themselves was a challenge.

Only one Torpedo Cruiser could be deployed, least one must face yet another maelstrom node. Opening airstrike with Ryuusei Kai was rather impractical in this map due to high AA bonus of enemy formation. However, it helped greatly in two earlier nodes, especially Ru-class node.

Kaga with 1 wild card, 2 Reppuu and 1 Saiun was able to AS everywhere except pre-boss south against Wo-class flagship II. Extra fleet anti-air equipment helped against Wo-class' airstrike. Sparkling the first fleet would help, since they are capable of taking out annoying late model DDs if hit.

In the end, it all came down to night battle to take down boss fleet. The goal of day battle was only to take out as many meat shield as possible so that second fleet could attack more important targets, such as the boss herself. There wasn't really any strategy for this map except for using 2x torpedo mount setup for the non-elite DDs.

In this case, their primary attack phase became the closing torpedo salvo, which hopefully would hit and take out any remaining late model DDs. Unlike shelling, torpedo salvos didn't seem to be affected by combined fleet penalty and thus had a high chance of hitting something. Not like non-elite DDs could do anything in shelling, besides, this gave the girls a chance to cut-in and deal some actual damage to armored targets in night battle.

Most of the bucket loss for this stage came from the first fleet, since they had low evasion and had to withstand two shelling phases against very powerful opponents. Ninjas for the second fleet! Ninjas!
Coming soon 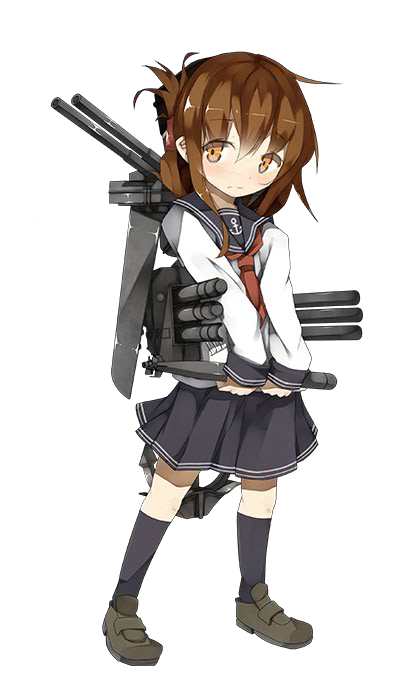 Mikuma-senpai's new turret is nice too, right Inazuma?
Christmas is the season of giving. Admiral, I want a cake 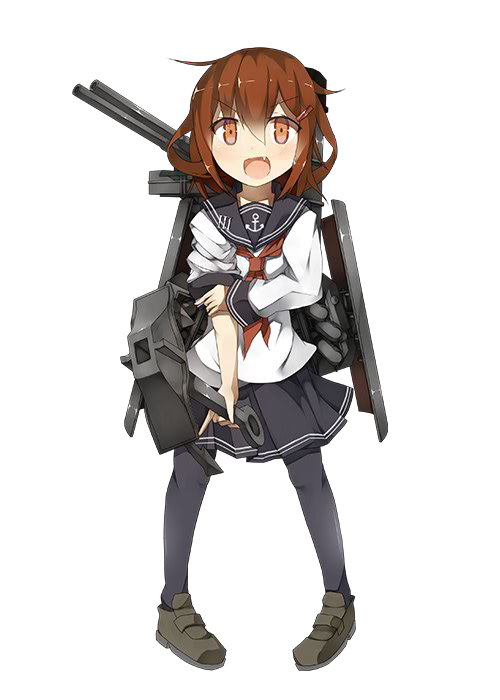 Retrieved from "https://kancolle.fandom.com/wiki/User:Fujihita?oldid=190555"
Community content is available under CC-BY-SA unless otherwise noted.