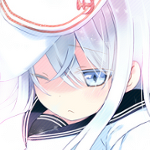 Originally joined in September 2013, but the only thing i remember and regret from then is sinking my Hibiki lvl 34, I wasn't aware of the existense of a wiki or any "How to play" guide...or the fact that ships could sink, the exact same day of the tragedy, i franektly looked all over the net, searching for a way to revive her, thats when i stumbled upon this wiki and found out she was lost forever. My first days as a Teitoku were over that same day.

Time passed and I cameback in 2014, sometime between April and May (most likely end of April since i didn't take part in spring 2014 event). I got over what had happened the previous year and started my journey as an admiral once again, I searched for Hibiki, raised her to lvl 70 as fast as i could and she has remained the highest lvl of my whole fleet to the present.

-Got Kaga (drop) before Akagi (quest)

-Scrapped a couple reppu's by accident (unryuu's quest not selected)

Retrieved from "https://kancolle.fandom.com/wiki/User:Augt00f?oldid=1013809"
Community content is available under CC-BY-SA unless otherwise noted.