This item can resupply fuel and ammunition at sea during combat. With this equipped during sorties when fuel and ammunition have become used up, the "Underway Replenishment" will occur and resources will be resupplied on the spot. Please use it to support the long sorties of the decisive battle.
(will disappear once activated and used)

Can be purchased off the cash shop with 300 DMM points for 2.

Stock equipment of Hayasui and Hayasui Kai, can be equipped on Hayasui and Kamoi (in AO mode) in both their standard equipment slots and expansion slot.

The fuel and ammo used to resupply the ships will be detracted from the player's stockpile. Partial replenishment can occur when not having enough fuel/ammo, and with 0 fuel/ammo the choice for replenishment won't appear. Married ships won't receive the usual 15% reduction for fuel/ammo consumption.

This item can always be activated, regardless of the fleet position, morale, or health of the holder. The only exception is when she is retreated using the Fleet Command Facility 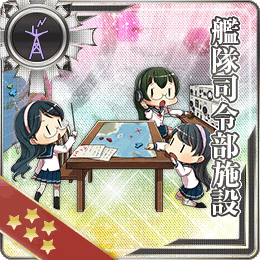 ; in these cases, you cannot activate the item.