This is an obsolete carrier-based fighter.
It is an old machine that was in operational service before the Zero-fighter, and boasts a history of exemplary aerial combat
With standard armaments and cruising capacity, its speed is now second class, but it is still possible to utilize this aircraft in a dogfight.

Developed by a team led by Jiro Horikoshi (who would go on to head development of the A6M and A7M) to the 1934 9-Shi specification for an advanced fighter plane, the Mitsubishi Ka-14 competed with Nakajima's prototype. The first prototype which flew in February 1935, was an all-metal-airframe low-wing fighter using an inverted gull wing and fixed undercarriage powered by Nakajima's 600 hp Kotobuki 5 engine.

Requirements of the 9-Shi specification were a top speed of 350 km/h at 3,000 m with the capability of climbing to 5,000 m in 6.5 minutes, and the Ka-14's performance greatly surpassed all requirements, with a maximum speed of 450 km/h while being quite maneuverable. An aerodynamically revised design with conventional wings was ordered into production as the Mitsubishi A5M.

It was introduced in 1936 and entered service in early 1937 as the A5M1 armed with twin 7.7 mm machine guns, soon facing combat at the start of the second Sino-Japanese war. Contemporary opponents such as the Boeing P-26C ("Peashooters") and the Curtiss Hawk Ⅲ, were poorly matched against the A5M, which proved effective and resistant to damage. A5Ms also served as escorts for the Mitsubishi G3M bombers.

Mitsubishi's development team continued to improve the A5M up to the final A5M4, with improvements such as a more powerful engine, additional drop-fuel-tank and closed cockpits. Altogether 1,083 A5Ms were manufactured by Mitsubishi, Watanabe and Naval Ohmura Arsenal, including 103 two-seat trainers.

The A5M series continued in service after 1941, but had been replaced by the A6M as the standard fighter of first-line carriers. The last battle of the A5Ms as fighters was the Battle of the Coral Sea in May 1942. As World War II came to a close, most remaining A5Ms were repurposed as kamikaze aircraft. 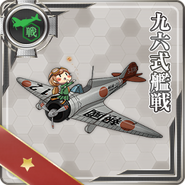