A small surface combat radar developed for anti-surface fire control.
By improving the Type 22 and increasing the precision, the search range and precision both reached levels suitable for practical use.
Also able to direct torpedo fire, the quality of the combat was greatly increased. 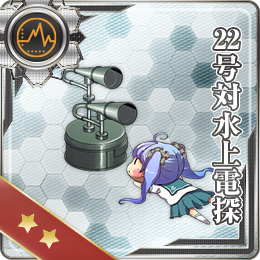 . In comparison to the Type 22, which was designed as a Shipborne Surface Search Radar, the Type 33 was designed as a Shipborne Surface Fire-control Radar. Three rectangular horn antennas (one transmitter and two receivers) were mounted on a Type 22 Radar frame. The device was completed during the final stages of the war, but wasn't installed on any vessel.

Retrieved from "https://kancolle.fandom.com/wiki/Type_33_Surface_Radar?oldid=1117437"
Community content is available under CC-BY-SA unless otherwise noted.