The standard naval reconnaissance aircraft, also known as the "Reisuitei".
Carried by battleships, cruisers and seaplane tenders, it served as the "Eye" of the fleet, operating recon missions.
Scouting is important! Please operate it on your flagships!

The Aichi E13A Type Zero Reconnaissance Seaplane was designed in 1937, though they did not enter production until 1940. However, they were the standard seaplanes of the Japanese Navy by the opening of the Pacific War in 1941. They operated as spotters from cruisers, reconnaissance aircraft from carriers and land bases, and personnel transports. At times, they also performed coastal patrol, and search and rescue duties. These aircraft were designed by Aichi Kokuki KK, but the majority of the 1,418 aircraft built were assembled by Kyushu Hikoki KK (1,237 units). At the very end of the war, some of these aircraft were used in Special Attack missions. 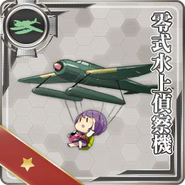