The final mass-production version of the Zero-fighter, "Type Zero Carrier-based Fighter Model 52".
As the development of its successors were delayed, the Zero-fighter Type 52 fought bravely as the main late-war carrier-based fighter.
Along with the "Suisei" dive bomber and "Tenzan" torpedo bomber, please use it as your mainstay air task-force.

Compared to the A6M2, the A6M5 had shorter wings and revised control surfaces while an improved exhaust system and cowling increased power delivery. Carbon-dioxide based fire extinguishers were added while the radio was updated. The A6M5 had a number of incremental updates throughout its various manufacturing lots. 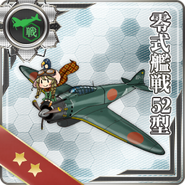