Known as the "Zero-fighter", this is the initial variant of the "Type Zero Carrier-based Fighter". Equipment included twin 7.7 mm machine guns and boasted twin 20 mm cannons.
With far-reaching range and excellent dogfighting ability, it represented overwhelming power.
But eventually, when the enemy produced new machines with greater firepower and speed, weaknesses such as ballistic resistance were revealed.

Known to the Imperial Japanese Navy as the 'Type 0 Carrier Fighter', this was one of the finest planes to serve in any air force. Capable of higher speeds than any comparable American plane and more maneuverable to boot, it also boasted a hugely powerful armament of two 7.7 mm machine guns and two 20mm cannons which fire explosive shells, giving it the power to shred any enemy in seconds. It has been in service since early 1940, and is known by the code name 'Zeke'.

The Mitsubishi A6M2 Type 0 Model 21 Carrier-based Fighter is the initial production variant of the A6M Type 0 Carrier-based Fighter (also called Rei-sen, but more commonly "Zero-sen", with the Allied reporting name "Zeke"), the predominant Japanese naval fighter of World War II. The 0 in its designation referred to the last digit of Imperial year 2600 (Gregorian year 1940) which it entered service. When encountered, it was codenamed Zeke, but eventually "Zero" became commonplace in Allied speaking.

Development by Mitsubishi started in 1937 whilst its predecessor - the Mitsubishi A5M (Type 96 Carrier-based Fighter) - was entering service as the Imperial Japanese Navy began to consider its eventual replacement. Specification 12-shi was sent to Nakajima and Mitsubishi, which both initiated early development phases whilst waiting more complete requirements.

Assessing the performance and experiences of the then service-fighter A5M, the IJN's final requirements were for the fighter to reach speeds of 600 km/h and climb to 3 km in 3.5 minutes while being able to operate for as much as 6-8 hours at cruise with drop-tanks. Equipment was to include a complete radio and armament of twin 20 mm cannons plus twin 7.7 mm machine guns as well as 60 kg of bombs. Maneuverability was to be at least equal to the A5M with a wingspan less than 12m so that it could be fielded on aircraft carriers. On top of those lofty specifications, Specification 12 had to use available engines, a significant limitation.

Nakajima's engineering team deemed Specification 12's targets impossible and resigned from the competition. Jiro Horikoshi, developer of the A5M (and subsequently, the A7M) thought it was feasible only with an aircraft as light as possible. Every possible weight-reduction measure was incorporated into the A6M, including Sumitomo Metal's new top-secret 7075 aluminum alloy, "Extra Super Duralumin". Armor for the pilot, engine or other critical points was dropped, as were self-sealing fuel tanks. It had a cantilever low-wing layout, retractable landing gear and enclosed cockpit.

The A6M1 prototype, powered by a 780 hp Mitsubishi Zuisei 13 engine, passed its testing in a remarkably short period and was ordered into service as the A6M1. Shortly after, the A6M2 incorporated an engine change suggested by the Navy to the 700 hp Nakajima Sakae 12. The new prototype so greatly surpassed the original specifications that 15 units were sent to battle in China, where they were untouched by planes that troubled the A5M. These results led the Navy to immediately order the A6M2 into production as the Type 0 Model 11.

One of the most advanced aircraft of its time, the A6M2 Zero was lighter and more maneuverable thanks to its aggressive weight-reduction and boasted the longest range of any single-engine fighter in the war. It could maintain stable flight well below 110 km/h, allowing it to out-turn any contemporary Allied fighter. Reports of its performance eventually reached the United States, where they were dismissed as impossible. The A6M2 Type 0 Model 21 in particular introduced folding wingtips so that the plane could better fit onto aircraft carriers, as well as improved range. 2,048 Type 0 Model 21s were constructed by Mitsubishi and Nakajima, including 508 trainers by Hitachi and Sasebo.

Compared to contemporary Allied fighters, however, the anorexic Zero-fighter traded ruggedness and pilot-protection for its maneuverability. This was compounded by its conventional - instead of self-sealing - fuel tanks, which could easily catch fire and explode when shot. Although it could fly a long distance and was difficult to hit, it required little damage to destroy, unlike its opponents.

When powerful Allied aircraft such as the P-38 Lightning, F6F Hellcat and F4U Corsair were fielded, the A6M - with its low powered engine - had difficulty competing. Regardless, it was developed further into variants such as the A6M5 Type 0 Model 52 and A6M7 Type 0 Model 62. 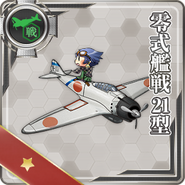 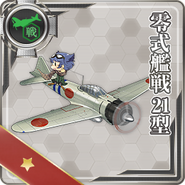