The creation of Kyushu Aircraft & Yokosuka Naval Air Arsenal, the advanced canard-style prototype fighter, "Shinden".
The propeller is placed in the rear, while heavy firepower is focused on the fore of the reverse-winged fuselage, exactly what you need for the future. In the real world, this aircraft was never taken to sea, but in KanColle it has a hook and reinforced tail for its introduction!

Masayoshi Tsuruno, a lieutenant commander of the Imperial Japanese Navy technical staff, proposed a canard-based design in 1943. Masayoshi also believed the design could be easily retrofitted with a turbojet when the technology became readily available. His ideas were developed by the First Naval Air Technical Arsenal into three canard-based gliders designated the Yokosuka MXY6. A 22 hp Semi 11 engine was fitted to one of these gliders. All proved the feasibility of Masayoshi's proposal.

Impressed by the testing of the MXY6 units, the Navy ordered Kyushu Aircraft Company (formerly Watanabe Tekkoujo) to design an interceptor around Masayoshi's canard concept. Kyushu was relatively free to work on the idea unlike other manufacturers while Masayoshi was selected to lead a team from the First Naval Air Technical Arsenal to assist Kyushu's engineering team. The construction of two prototypes started in 1944 while stress calculations were complete in January 1945, producing a working prototype in April 1945.

The J7W1 prototype was by a 2,130 hp supercharged rear-mounted Mitsubishi MK9D (of similar lineage to what would be installed in the Reppuu 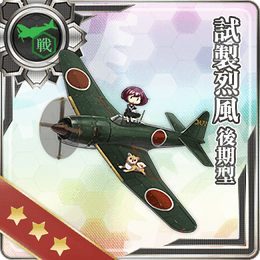 ) driving a six-bladed propeller via an extension shaft. The engine was cooled via long, narrow obliquely mounted intakes on each side of the fuselage, but this design caused problems when the engine was running on the ground. Unavailability of other components also postponed the flight of the J7W1. The prototype was flown successfully by Masayoshi in August 1945 but showed problems, such as vibration in the drive shaft.

A canard based design means that a small wing or foreplane is placed ahead of the main wing of the aircraft, while the pusher configuration - a propeller located behind the engine - has unique advantages, such as not obstructing the placement of guns. Modern examples of canard aircraft include the successful Rafale and Typhoon multirole fighters.

Even before it had flown, the Navy ordered the J7W1 into production and it was to carry very heavy firepower of four 30 mm cannons. Regardless only the two prototypes were completed, with one scrapped while the other was claimed by the US Navy Technical Air Intelligence Unit. Subsequently it was reassembled in the United States, before being transferred to the Smithsonian Institution and is now in storage at the National Air and Space Museum.

As a land-based interceptor that was never successfully produced, the Shinden Kai (in this case meaning "Modified" rather than "Improved") in KanColle is a theoretical variant with modifications to operate in a carrier-based environment.

In its model designation, J was for land-based fighters of the IJN, while W referred to Watanabe, the company that became Kyushu Aircraft Company.

Retrieved from "https://kancolle.fandom.com/wiki/Shinden_Kai?oldid=1086456"
Community content is available under CC-BY-SA unless otherwise noted.