Start a Wiki
Notice
Application has been Closed as of 29th June 2018.You may refer to this thread for more info

First hinted as part of Kancolle Phase 2 transition and implemented in 23rd April 2018 update, admirals will be able to apply for a server transfer until early Summer 2018. 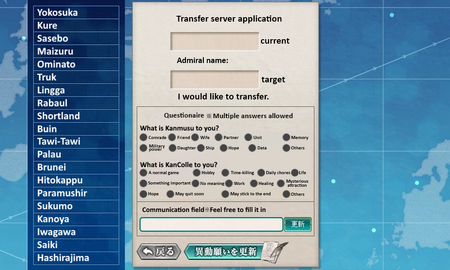 In order to apply for server transfer, you will need to do the following steps in order:[1]

A YouTube video clip overviewing the server transfer feature may possibly be also used as a rough guide.

Retrieved from "https://kancolle.fandom.com/wiki/Server_Transfer?oldid=1036955"
Community content is available under CC-BY-SA unless otherwise noted.