< Seasonal
Edit
As of March 13th 2015 update Hishimochi seasonal-event is over. Hishimochi no longer drop and their quests are removed. Any hisimochi you already have will remain in your inventory. For more information see February, 23rd 2015 Update

During the event, Hishimochi can be obtained, substituting the normal ship drop. Instead of the usual notification, a different one will appear.

(These are under the same assumption as Present Box till proven wrong, see [1])

Obtainable in the following maps[]

For more info about the drop rate see (scroll down to the bottom option "菱餅" ): Kancolle Database Unless specified, assume all drops are from the boss node.

The update mentioned that mochi is droppable in many maps beyond world 3-3. This does not mean all the maps.

Hishimochi can be opened through the item screen and exchanged between three different colours: 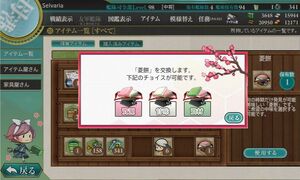 A seasonal quest chain (2 quests) were added for the mochi. It was reported that Quest B6 needs to be clear to unlock the first quest.

The first quest (shown above) requires 3 mochi to complete. This rewards:

The 2nd quest (shown above) requires 10 mochi to complete and rewards:

Mochi Quests count what you have. You only need to get 10 mochis to complete 1st and 2nd quest. Therefore, it is advised not use any of the mochi until you have completed the chain quest to avoid having to find more mochi.