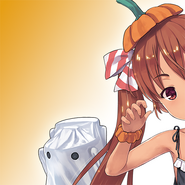 Libeccio's Halloween CG shows a Northern Princess's Aircraft being painted into a pumpkin (known as Zucca Plane). Her Halloween form also appear in Chapter 105 of 4Koma Comic "Fubuki, Ganbarimasu!" and it might explain how she got the Zucca Plane.

Retrieved from "https://kancolle.fandom.com/wiki/Seasonal/Halloween_2015?oldid=781917"
Community content is available under CC-BY-SA unless otherwise noted.