The Reinforcement Expansion is a consumable item added alongside the Summer 2015 Event that allows you to reinforce a ship to permanently add an additional utility equipment slot. For example, you can equip a reinforced ship with damecons 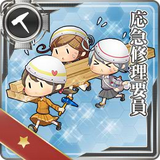 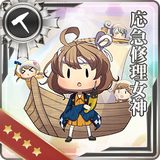 without compromising their equipment loadout.

To use the Reinforcement Expansion:

Only certain pieces of equipment can be placed inside the additional slot given by a Reinforcement Expansion; the equipment allowed is dependent on the ship that was given the extra slot. Equipment placed inside this slot functions as if it were placed in a normal equipment slot.

Events may reward this item for clearing certain maps on certain difficulties. Previously, this item was rewarded for completing:

Retrieved from "https://kancolle.fandom.com/wiki/Reinforcement_Expansion?oldid=1133469"
Community content is available under CC-BY-SA unless otherwise noted.