Map during HP phase but route to node Z3 not unlocked

The following planes have an additional damage bonus in this map. Zuihou additionally has her own unique bonus multipliers at Boss Nodes and Node X.
Note: For the 2+ Equipped Bonuses, both equipped planes cannot have the same name.

The following equipment deals bonus damage to Battleship Princess and Heavy Cruiser Princess Variants.
This is not a map specific bonus, but applies to enemies appearing in this map.

For Medium+ ONLY. E-4 does not have the restriction like E-3 to unlock nodes; however, you will need it for Boss debuff. This makes it optional but you should consider this before attempting the difficulties. The detailed explanation for high-altitude is in E-3's tab. This one will only cover the minimum air power needed for 0.5x multiplier (for 0 high-altitude interceptor) and 0.65x multiplier (for 3 bases with at least one Saiun in each).

Surplus is recommended in case of fluctuation. Please perform calculations based on the LBAS that you have (LBAS Air Defense Values) before continuing as you will not be able to obtain the boss debuff without reaching it.

All 3 land-bases are available. Only a maximum of 2 can be sortied, while the third may be used for air defense. The air raids in Medium+ are High-Altitude Air Raids, so use High-Altitude interceptors if you have them available.  The attacking enemies all have non-offensive fighters in their first slots, so equip the strongest three interceptors to the bottom three slots of defending bases to maximize enemy bomber interception.

This can be done via a Submarine Fleet if you have enough Seaplane Fighters, otherwise you can use a Surface Task Force Combined Fleet instead.

Any fleet type can be used for this section (TCF and single fleet can possibly skip a battle and route A to O), but STF/CTF are recommended for consistency and ease of meeting LoS requirements

Use Transport Combined Fleet from Phase 1.
Not needed on Easy and below.

Do the following in any order (Be advised some below may not be required for lower difficulties)
Note: Only attempt when on the boss' final form. Conditions performed before that will not count. 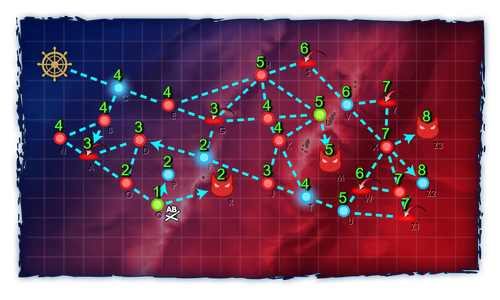 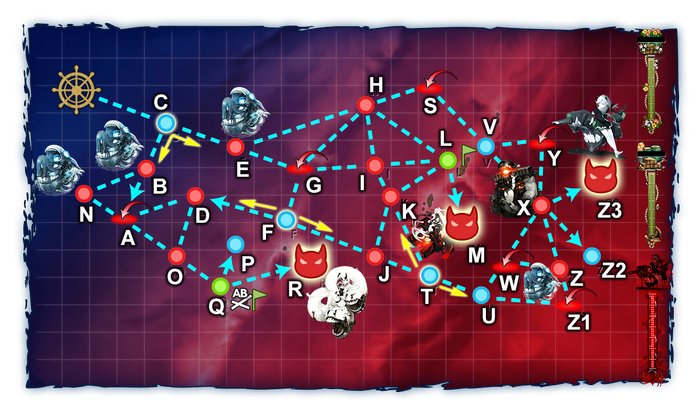