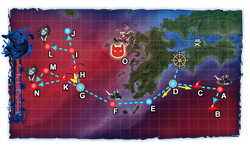 Map before unlocking routes to nodes R and S 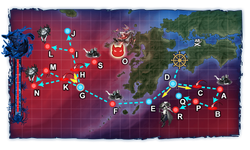 Map after unlocking routes to nodes R and S 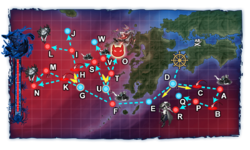 Full map after unlocking the route to node O

For Medium+: Before you start! - Land Base (LBAS) Defense CheckEdit

You need to perform LBAS defense to unlock the boss node for Medium+ ONLY. In this case, enemy raids on allied bases are considered high-altitude raids instead of normal. These raids apply a multiplier to air defense air power based on number of high-altitude interceptor squadrons assigned to air defense as shown below:

Currently, there are only three such high-altitude interceptors which are not obtainable currently:

If you do not have access to any of these, you will have to calculate based on the enemy's raid air power multiplied by 0.5x. This makes it harder to obtain the AS requirement albeit not impossible. For E-3's requirement, you will need a combined Air Defense air power from 2 bases of at least (for 0.5x multiplier):

Keep in mind 1 Saiun per base can be used to raise a base's Air Defense air power by 1.3x, which is often more beneficial than adding a 4th plane with lower air power than the other 3 slots.

Please perform calculations based on the available equipment that you have (LBAS Air Defense Values) before continuing as the map cannot be completed without unlocking the boss. Technically, the requirement is doable with no previous event equipment, even on Hard, but may require significant investment into interceptor upgrades.

Not needed to clear the map, but does supply a small (~1.08x) post-cap bonus during the boss's final form only
Do the following in any order (Be advised some below may not be required for lower difficulties)
Note: Only attempt when on the boss' final form. Conditions performed before that will not count.

LB Defense: You can bait the LBAS raid with 1+ submarines 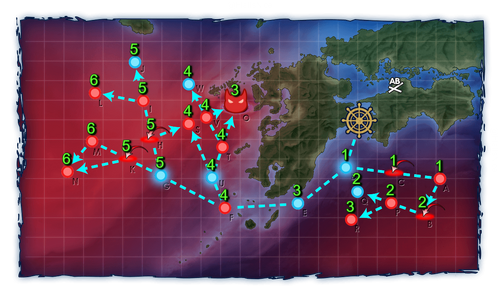 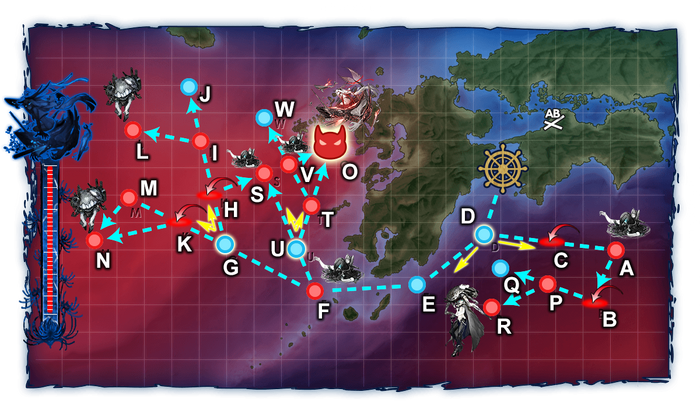