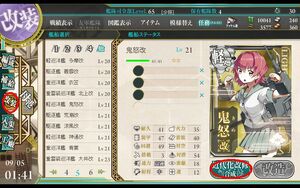 Ship modernization is used to increase

Armor stats. In addition, Maruyu can be used to increase

Luck, while DE can increase

To modernize a ship, first pick the ship you want to upgrade, then choose 1 to 5 ships to "merge". You will lose them in the process, make sure you didn't pick the ones you want to keep. A consumed ship's equipment is wasted as well, you will not retain any equipment still equipped on the consumed ship. Remember to remove any valuable equipment the consumable ship might possibly have. Also stock equipment can be broken down for small amounts of material though most likely not worth the effort.

Following the December 2013 update, Maruyu can be used as Modernization material for +1.2 luck (+1.6 luck if she is remodeled to Maruyu Kai), result will be rounded down after adding random number below 1. You can still increase a maxed-out ship's luck through modernization. Luck gained through modernization is retained upon remodeling.

After the 22nd April 2019 update, certain AVs are now able to be used as modernization material to increase HP of certain ships.

Mizuho can be used as fodder to increase the HP of the following ships:

Kamoi can be used as fodder to increase the HP of the following ships:

Generally, those stats are unaffected by modernization and follow the following formula instead (ASW can also be raised using DE modernization):

Todo
Use an iterator.

All ships will provide a fixed input for modernization.