The Medal is an item obtained primarily via Extra Operations, Events, and some Quests. They can be exchanged for certain rewards.

Medals can be exchanged for rewards by going to the Item (アイテム) menu on the naval base UI. There are three options available for exchanging: Blueprint, Improvement Materials, and Resources.

More information can be found here

Every month, players can obtain a medal for depleting the health bar of most (but not all) extra operation maps. Currently 1-5, 2-5, 3-5, 4-5, 5-5 and 6-5 provide a medal upon depleting their health bar, giving 6 medals in total if all are cleared within the month. The bars reset to full at 23:59JST of the last day of each month, allowing for medals to be obtained again.

Blueprints are needed by some ships in order to remodel. Ships that require Blueprints to remodel are usually very strong, comes with rare equipment or have their own special uses which differentiates them from the other ships.

The priority score is rated on the following points:

Keep in mind that the priorities might change depending on how far you are, what kind of ships you have available and what your current needs are, so keep the priorities only as rough guidelines. In case of times where the events are starting soon, consider saving your blueprint until you know what you actually need during the event.

While getting high priority ships are encouraged, do not recklessly pursue them in a way which will affect your fleet negatively and plan things out before committing yourself to something.

Note: The priority is listed from top to bottom, including those that are placed in the same category (e.g. Suzuya

is ranked higher than Yura

). However, the prioritization of ships in the same category is of less importance and you are free to disregard it and treat them all as equal priority if you wish. 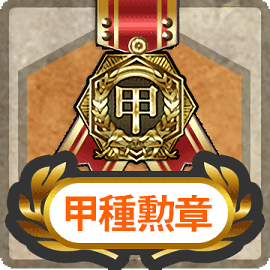 Starting from the Winter 2015 event, the First Class Medal (Also known as the Class A Medal) is rewarded to players who have cleared the final map of the event on 甲 (Hard) difficulty. While this medal is held in the inventory, it is shown to others when they see your profile in ranking, along with the amount the player is carrying.

However, keep in mind that if the medal is used/consumed, the medal marker on the profile will disappear. Given its rarity, players may prefer to keep it instead.

Retrieved from "https://kancolle.fandom.com/wiki/Medal?oldid=1086516"
Community content is available under CC-BY-SA unless otherwise noted.