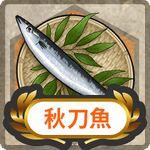 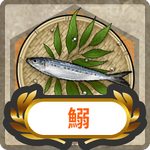 Saury (Mackerel, 秋刀魚, さんま, Sanma) is an item that can be obtained during Saury seasonal mini-events (based on Pacific saury festival). It is obtainable as a map drop, can be exchanged for various items, and is required for completing the events' limited quests. The events usually happen in October - November:

A new ship also has appeared

The following mechanics are likely to affect Saury drop rates.[1]

All listed nodes drop on S ranks, red nodes are known to drop on A ranks (usually at a lower rate).

You must have the Saury/Sardines available in your Inventory in order to complete the Limited-time Saury Quests. DO NOT use your Saury/Sardines before you complete your Quests!

SB03: can't choose the old banner if it's already in possession