This facility is used as a command center aboard warships to direct naval fleets at sea.
This can only be used aboard larger warships. When used on the flagship of the Combined Fleet, a heavily damaged ship can be escorted away from the battle line by a destroyer still in good shape from the Escort fleet. 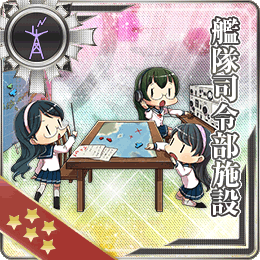 allows a destroyer in the second fleet of a combined fleet to escort a heavily damaged ship away from the sortie.

Retreating using the Fleet Command Facility will reduce the Morale of both the retreated ships to 0. (depending on how long your sortie lasts, their morale will be higher than 0 when you reach the home port) Do exert caution when using a full sparkled fleet.

See this video for better explanation (Credits to Nekomahjong).

If multiple ships are heavily damaged:

Retrieved from "https://kancolle.fandom.com/wiki/Fleet_Command_Facility?oldid=1063136"
Community content is available under CC-BY-SA unless otherwise noted.