[Expand all] [Collapse all] [Toggle all]

Players are to be advised that changing your difficulty from Hard(甲) mode to Easy(丙) or Normal(乙) difficulty after applying any debuffs/special mechanics will reset all of them upon the difficulty switch, forcing you to start from scratch.

Changing your difficulty from Hard(甲) to Normal(乙) does not reset any debuffs and special mechanics.

Changing your difficulty from Easy(丙) to Normal(乙) does not reset any debuffs and special mechanics.

However changing from Easy(丙) or Normal(乙) to Hard(甲) or vice versa will cause all your debuffs and special mechanics to reset.

If you have Nagato, Prinz Eugen, and/or Sakawa, depending on which option you choose, please bring them, duplicate Prinz Eugen & Sakawa included.

Most recommended setup to go with for E-5. Please note as per written on the Branching Rules, bringing any Slow ships or a second CLT will result in being taken K to M. However depending on player preferences, this can be turned into an advantage by bringing a more powerful fleet compared to the all Fast fleet which has limited options compared to the Slow fleet, where the trade off is going through an extra submarine node.

WARNING: Not recommended overall due to low Air Power, which is very critical especially for higher difficulties, but is an option in Easy mode if STF is preferred over CTF for the player.

Using this composition makes achieving air superiority (AS) difficult against nodes N, O, P and T. Without air superiority artillery spotting is not possible and plane losses will be high.

Alternatively you may attempt to achieve Air Superiority (AS) with 2 CVLs loaded with fighters and an additional fighter-bomber to let them be able to participate in shelling, as well as CAVs with seaplane fighters to help with that.

However if you choose to go with this option, please make sure to calculate your Air Power accordingly.

How to Open up the Secret Node

E-5 has an additional starting location[3] (2nd starting point and node U) that can be unlocked by doing the following in any order and can be done in separate runs:

After completing the requirements above, a cutscene will occur where the secret node will reveal itself after the end of the next node.

1/2
Add photo
After unlocking the secret node, there exists a secondary debuff mechanism which will trigger when certain conditions are met. When triggered, you will hear a quest clear sound for confirmation after you come back to your main screen, and the Boss Dialogue Sound, Text and CG will change, reflecting her debuffed state. [5]

How to Debuff the Boss

After triggering the debuff, the "Quest Completion Sound Effect" () will play when returning from sortie. 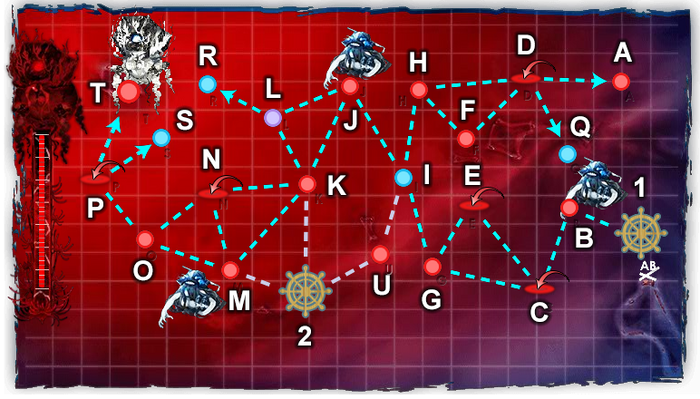 ☑ All drops (enabled)☒ All drops (disabled, only rare drops)
Retrieved from "https://kancolle.fandom.com/wiki/Fall_2016_Event/E-5?oldid=787747"
Community content is available under CC-BY-SA unless otherwise noted.