If you see long colored boxes and not round nodes, clear your cache to see the updated styles.

Rules apply in order. For instance, a fleet with both a BBV and an LHA will proceed to node E. Hayasui is suspected to also force D routing in #4 and also transports a greater base amount of TP. Admirals without AV or LHA who wants to clear on Medium, may be able to use a Hayasui-4DD-CAV (4 Zuiun build) main fleet as a branch option.

- Recommended for clears on Medium and Hard difficulty, and Easy difficulty farming.

- For Easy difficulty boss S-rank clears and TP drain on Medium difficulty for Admirals who do not possess Akitsu Maru.

- For Medium Final clear ONLY for Admirals who do not possess Akitsu Maru.

- Easy difficulty Asashimo farming ONLY. Do NOT proceed to node E

To increase the accuracy of symbol-marked fleets, please submit the relevant screenshots to this thread. 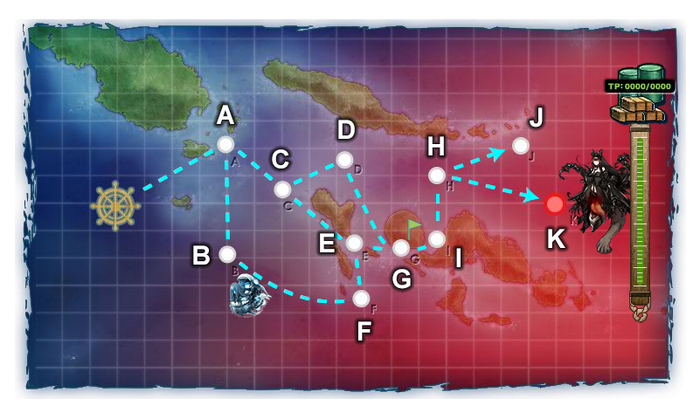