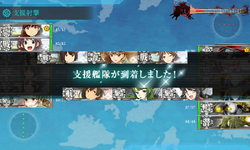 Support expeditions involve sending a fleet into an expedition to provide additional bombardment during the opening stages of Combat. There are two types of support expeditions, normal support and boss support:

Some important points about support expeditions are:

A support expedition requires a minimum of at least 2 DD?. The other 4 slots affect what type of support will be provided. The three types provided are Aerial Support, Support Shelling, and Long Range Torpedo Attack:

Addendum: Previously, 2 CV(L)s are usable for Shelling Support, but as of the November 17th, 2017 update, using 2 CV(L)s will result in Aerial Support instead.

The attack power cap and the importance of accuracy render 2-3 main guns or 2-3 bombers + 1-2 radars as standard setup for battleships and carriers (when dealing with heavily armored targets, DD can use 3 radars to increase the chance for their scratch damage). Sparkling all ships for better accuracy is also recommended.

See the following tables for reference

Standard composition is 2 DD, 4CV(L/B) with the maximum amount of carriers possible participating in the airstrike. Only ships with planes participate in this phase, as this support type will lead you through a self-contained air phase. This means that your fleet will be subject to the 1st and 2nd phase of Aerial Combat. The efficiency of this support is heavily dependent on whether you can reach a desirable air status, and whether the enemy

is strong or not. Since this support also makes use of the airstrike formula, the only thing relevant are the planes you're using on your carriers.

The Aerial Support Fleet fights for the air control for a desirable air status, just like how it happens with the main fleet, with a few twists:

Since each bomber attacks their own target using the airstrike formula, it is important that you try to reach a favorable air control, to reduce the amount of bombers being lost and to maximize the damage you can dish.

The Aerial Support fleet uses the following formula for basic attack power of each plane (same as the usual airstrike formula, with the exception of 25 constant being reduced to 3) and a postcap modifier of 1.35:

Anti-submarine Patrol can also occur when using aerial support. At least one CVL and either of one CVL/AV/AO/LHA/CL/CT or 2DE is required to trigger it. The recommended composition is 2CVL 2CV 2DD, equipped with high ASW planes on large slots. Take note that on a node with only surface enemies, it will default back to aerial support (if possible).

In ASW Support, all planes with ASW stat and on a non-zero slot except carrier fighters will participate. Damage is calculated by the following formula:

Currently, torpedo support is only capable of dealing scratch damage, regardless of torpedo stat. It is not known if this is a bug, or intended behavior. As such, it can currently be considered a failure state, when your support fleet does not fulfill the conditions of any other 'proper' support type.

This is the general trigger rate for all support expeditions.

Retrieved from "https://kancolle.fandom.com/wiki/Expedition/Support_Expedition?oldid=1127523"
Community content is available under CC-BY-SA unless otherwise noted.