Start a Wiki
Notice
Please be advised the Information written on this Page are still under investigation and are subject to change pending further confirmations. To clear this Map at full potential with the safest compositions, you are advised to wait until all possible Compositions become confirmed and available

A German operation with the goal of blocking Allied shipping to the United Kingdom. All foreign navies (except the US) are involved in this battle.

The navy of Germany during the 2nd World War.

The navy of the United Kingdom.

The navy of France.

The navy of the Kingdom of Italy during the 2nd World War.

The navy of the Soviet Union during the 2nd World War.

The 1st phase requires you to use CTF and clear the HP Gauge at boss node J.

Unless you want to deal with random routing at L, you must have at least 1?/2/3/4 French+German ships. Once you reach Phase 2, there will be 2 ways to reach W: CTF and STF.

Due to the mix of multiple types of enemies that have different kinds of weaknesses, it is important that you are capable of dividing up the roles and ordering your fleet.

After clearing Phase 2 Boss, the route to the Final Boss is hidden and requires the following steps to reveal it:

Once all requirements are achieved, the Final Boss Node Z2 will be unlocked.

DISCLAIMER: Please note that some requirements written below may not be required on Normal or lower difficulties.

The following have been confirmed to grant post-cap damage bonuses for your ships on the boss node:

The same routing rules and damage bonuses as prior to clearing apply, but it is recommended (especially on higher difficulties) to use Nelson

as flagship, with Bismarck

in the 3rd main fleet position and a historical CA

in the 5th to take advantage of the Nelson Touch mechanic.  Since the Nelson Touch will only activate once per sortie and only while using Cruising Formation 2 (or Double Line), it is recommended to choose other formations at pre-boss nodes.  The modifiers for the Nelson Touch stack with other bonuses at the boss node to result in massive damage and much easier S ranks.

Map after depleting the second HP bar but without the third boss node Z2 unlocked.

Map during third HP phase at boss node Z2 but without alternative route. 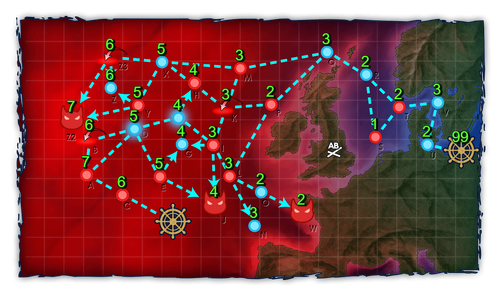 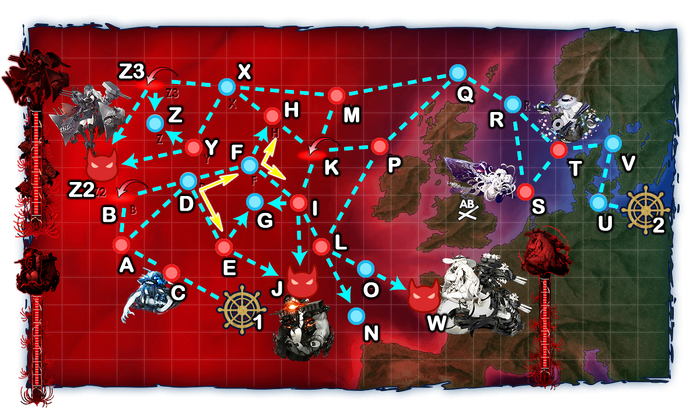