The Large Motor Boat, in short, "Daihatsu" used by troopships for landing operations or landing ships is nowadays called a "Landing Craft". The Daihatsu which is similar to amphibious vehicles is used aboard large troopships or assault landing ships. 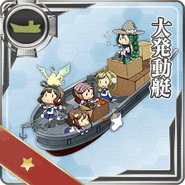 Retrieved from "https://kancolle.fandom.com/wiki/Daihatsu_Landing_Craft?oldid=1063187"
Community content is available under CC-BY-SA unless otherwise noted.