Combat is where the majority of the game's action takes place. When sortieing to a map, you will notice along the way that there are red nodes scattered all over the maps. These are combat nodes, in which your goal is to sink the enemy ships. Combat is completely automated, save for a few decisions you can make during some sections.

This article explains the basic flow of combat mechanics and is more focused for beginners to gain an understanding as to how combat works. In case you already have a basic understanding of this, use the tabs above to navigate to the topic you're interested in.

This article will explain the following combat phases in order:

Before we actually explore each combat phase though, it is important to know what the relevant stats are when dealing damage and how they are applied during each phase.

Each form of attack has their own mechanics associated with them as well as a damage cap. The damage cap is also known as the softcap and any damage value that goes past the damage cap will be met with diminishing returns. Of course, there are exceptions to anything, but more to that later.

When approaching a red node, you are given the choice to select a fleet formation. There are 5 formations for the player to choose and each formation has its advantages and disadvantages.

However, in case the player has less than 4 ships, you will not be given the choice and the fleet will default to Line Ahead formation.

Note: Keep in mind that the formation you select here, will only affect your own fleet.

Introduced in Fall 2017 Event for the first time along with the Strike Force mechanic, the vanguard is a defensive formation which affects the ships based on how they are positioned in the fleet.

As shown above, vanguard formation has two modifier values divided between the Top half and the Bottom half which split differently depending on the number of ships.

The rough estimates of the evasion bonus are as followed: Regarding aggro effect, the bottom half is attacked more often than usual, which is supported by its higher evasion.

A test has been done albeit roughly regarding Vanguard Formation's effect on Air Raid nodes. A conclusion was reached as followed [2]:

While the aggro effect is still there, you do not gain any evasion bonus against airstrikes. In other words, your evasion will be the same as in Diamond formation, except with a worse AA modifier of 110% instead of 160%.

Vanguard and Pre-setup Vanguard Formation is position-sensitive. As such, learning how to position is the key in utilizing the formation to its greatest extent but also its greatest weakness. Once you setup your fleet to benefit the most from vanguard, you can and most likely disorder your fleet's shelling depending on what you want to utilize. Consider this situation: This is beneficial in cases in which you need to protect weaker ships, but in cases in which you need all the ships to participate, i.e. Boss Nodes in an event, this can become troublesome to setup as using vanguard formation to pass through the nodes more easily can harm your damage chance at boss node due to your setup. Consideration toward fleet ordering is required to setup properly.

Factors that decides which formation you should choose:

In detection, your fleet attempts to detect the enemy fleet by either sending out recon seaplanes, using radars or detect them using sonars, in case you are dealing with submarines. The success rate of a detection is influenced by the

In case your fleet fails to detect the enemy fleet, your fleet will not participate in the Aerial Combat Phase, resulting in an automatic Air Incapability. Failing the detection will also run the risk of your recon seaplane getting shot down.

Aerial combat is a phase where both friendly fleet and opponents send their planes out at the same time trying to determine the air control status while shooting down each others' planes. The fleets then start their anti-air defense against bombers and the remaining surviving bombers would then launch an attack on the enemy ships.

The important main stages that take place in aerial combat are in the following order:

In this phase, all fighters and bombers fight for the air control to establish air superiority. The air state is dependent on how many fighter power your fleet has, compared to the enemy fleet. Planes are proportionally shot down depending on which air state has been achieved. The air states are as follows:

In case your opponent does not have any fighter power, you will gain Air Supremacy by default. If neither side have aircraft that can participate in the fighter combat, the air control will default to parity. You are advised to always attempt to obtain at least Air Superiority and in cases where it's possible, Air Supremacy. The stronger your air control, the more advantages you gain in your favor.

After the first stage, all the fighters will retreat, as they already finished their job of establishing air control. In this phase, all your bombers will approach the opponent fleet in an attempt to attack them, while the enemy will attempt to shoot them down through

The strength of the

fire is heavily dependent on the

equipment and Anti-Air Cut-In attacks. While base

stats of a ship do contribute to your anti-air, it is the least relevant.

All remaining surviving bombers will randomly choose and attack a target among the enemy fleet. The damage done is affected by the amount of planes in a slot and whether you have used a dive bomber or a torpedo bomber.

During every battle, an engagement form is declared, which further modifies the amount of damage you can potentially deal.

During day combat, your fleet and the enemy will exchange fire and attempt to sink each other. It is basically the phase where also the most action happens, including the majority of the phases that was explained above.

This is further categorized into two categories:

Due to the length of the day combat phase, you are recommended to check out Day Combat instead for more in-depth information regarding this phase.

Support expedition involves sending a fleet into an expedition to provide additional support to the current fleet that is at sortie. Depending on whether you used a node support that supports you on the way or a boss support, the expedition fleet will appear on the battle nodes and fire an opening barrage against the enemy fleet. The type of support you receive depends completely on what kind of ships you have sent to the expedition. This mechanic is part of the Opening Phase.

Note: Keep in mind that this is only available for World 5 and event maps.

For more information regarding support expeditions, check out Support Expedition.

When at least Air Superiority is achieved during the Aerial phase, ships that are equipped with a

If you want to learn more about artillery spotting, check out the Artillery Spotting requirements.

to target them during the shelling phases even if there are surface targets present. It also applies to Aviation Heavy Cruisers, Aviation Battleships, Seaplane Tenders, Light Carriers and Akitsu Maru 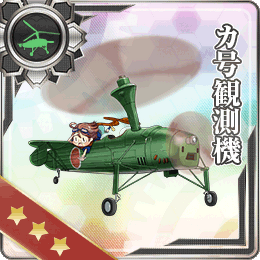 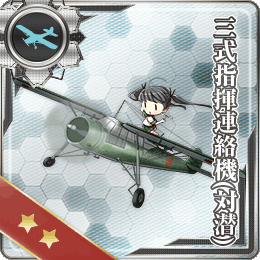 Note: Guns are completely useless against submarines, hence they should not be used if you are only facing submarines as enemies, like 1-5.

To find more information about ASW among other things, check out the Day Combat.

In the scenario that the enemy fleet has not been defeated yet during Day Combat, the player has the choice to pursue them in a Night battle (夜戦) to finish them off. Ships who utilizes both Firepower and Torpedo stats have a drastically increased strength, giving them a stronger edge against the tougher armored opponents. The damage soft cap is raised to 300 during the night, allowing your ships to effectively unleash even more damage to your opponents. Bombers cannot attack during the night, unless they are equipped with the Night Operation Aviation Personnel 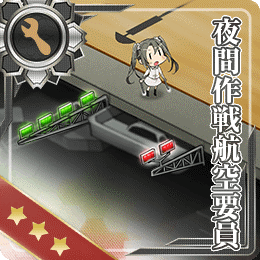 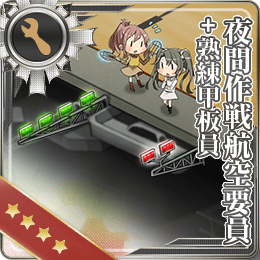 During night battle, the following effects are applied:

The following night equipment buffs can trigger when equipped. Keep in mind that only one of them triggers if your fleet contains duplicate equipment (e.g. 2 searchlights, 2 starshells).

While entering a night battle offers many benefits, keep in mind that this also applies to your opponents! Enemy destroyers who aren't as much as a threat during the day will also gain a huge increase in firepower during the night, so be careful that you don't end up on the short end of the stick.

Night battle special attacks allow your ship to Double Attack (DA) and Cut-In (CI) at night. Compared to artillery spotting, these special attacks are less demanding on equipment setups and give different bonuses. Note that it is important to realize the differences between the two types of special attack and know when to use which.

Different setups have chances to trigger different attack types. Attack types are only determined by the prerequisites.

Has a very high (~99%) and relatively consistent activation chance.[1] Activation rate is not dependent on luck. This typically results in more consistent and higher average damage than cut-in setup for ships with normal luck values.

The probability of a Night Cut-In occurring is given by the general formula:

The result of which can be multiplied by 100 and interpreted as a percentage.

Destroyer Cut Ins are special Night Battle attack types unique to only Destroyers when they meet the proper equipment setups. Their properties are as follows:

In the scenario that the enemy fleet has not been defeated yet during Day Combat, the player has the choice to pursue them in a Night battle (夜戦) to finish them off. During night battle, the following effects are applied:

Note: Unlike Artillery Spotting attacks, the special attacks performed during the night are not post-cap, meaning that it will be affected by the damage cap.

For more information regarding night battle and the setups, check out Night Battle.

Retrieved from "https://kancolle.fandom.com/wiki/Combat/Main?oldid=1140732"
Community content is available under CC-BY-SA unless otherwise noted.