Defense Power is calculated as follows:

If Damage Value is less than 1, it becomes scratch damage, and the following formula is applied instead:

For the Opening Airstrike:

in the Defense Power formula. It is calculated as follows:

These are the factors directly applied to your ship's attack power.

Effects from the modifiers are multiplied/added cumulatively.

Note also that against installations, only firepower is taken into account; in night battle, even though attack power is normally the sum of firepower and Torpedo, for installations specifically the Torpedo stat is disregarded.

These modifiers do not affect Aerial Combat.

Certain Equipment setups have a chance to trigger special attacks at night, giving boost to both attack power and accuracy. This stage is usually the most rewarding / dangerous because both sides have drastically increased attack power.

The ship must be able to participate in the night battle in order to trigger the special attacks.

a few points would be added for CL's attack power after all pre-cap firepower but before the cap if they used fit guns.

Applies after the pre-cap modifiers. This is a soft limit on your effective attack power. It is given by:

Daytime Shelling Attack Cap (180) often makes it important to utilize Artillery Spotting since they boost your attack power after the cap, Night Combat can be very dangerous and/or rewarding due to having a very high cap (300) and the inclusion of torpedo to firepower for the basic attack power calculation.

In damage calculation, Post-cap modifiers apply after the cap, but before enemy armor reduction. Thus they are very effective approach to boost your damage output (esp. against heavy armor enemies).

Currently, the post-cap modifiers are from:

Certain equipment setups provide a chance to trigger special attacks during day battle, giving boost to both attack power and accuracy. The damage modifiers are applied after the cap (180), thus very effective against heavy armor targets. Note that the ship requires at least 1 seaplane on board to perform Artillery Spotting.

Most forms of attack (Torpedo, Shelling, Anti-Submarine, Preemptive Bombing) have a chance to crit the target. The damage modifier applies after the cap.

It should be noted that the critical message always appears when damage dealt is greater than or equal to 40, regardless of whether the 150% modifier was applied or not. On the other hand, the critical message will never appear when damage dealt is less than or equal to 14, even if the 150% modifier was applied.

Critical damage rate seems to depend on accuracy. 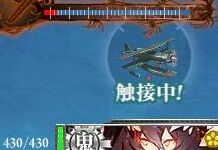 Contact takes place during the Aerial Combat bombing phase, and applies to the bombing damage of all allied planes.  For activation conditions, rate and additional details, see Aerial Combat.

The damage increase depends on the +accuracy bonus

Damage against certain targets increases when both large-caliber main guns and AP shells are equipped.

This modifier works against the following enemy classes:

While the above formulas and statements are generally true for damage taken by a player's ships, there are additional limits that apply to friendly units only. These protection mechanisms are important for game balance and to protect your fleet from sinking.

Retrieved from "https://kancolle.fandom.com/wiki/Combat/Damage_Calculation?oldid=1148860"
Community content is available under CC-BY-SA unless otherwise noted.