Within the water, a recitation of the Gosei is heard.

As the setting is described, an Abyssal fleet, Fleet Zero, is shown. Along with a palette shift, a it morphs into Fleet One & is then engaged by a naval base's Fourth Fleet. The naval base is in search of the Abyssal's base.

A newly-assigned & now arrived Fubuki procedes inside the main building, is taken on a tour, one stop being a shared room & meeting the rest of the Third Torpedo Squadron.

A fight scene interrupts, with the result being the base is located & the Fourth Fleet is ordered to return.

Back at the base, Mutsuki, Yuudachi, & Fubuki share their combat experience, with Fubuki providing an odd answer. She's saved by a trip to the to the famous First Carrier Division. Akagi's words strike a chord within Fubuki, especially the hope to be in the same fleet.

The next stop is Cafe Mamiya, but before they get to fully enjoy, a siren activates, notifying them & others.

At the port, the Third Torpedo Squadron, the First (Carrier) Task Force, & the Second Support Fleet are briefed as the Fourth Fleet rests in the docks.

Troubles arise when it is revealed Fubuki has no experience, but with coaxing from the others, she pushes on. They encounter Fleet Two, with Second Support Fleet soon engaging as well.

Suddenly, Fubuki is ambushed by a Fleet Three Destroyer I-Class Elite Late Model, but before it can damage her the Second Fleet's air wing strikes. With the Second Support Fleet's assistance, Akagi's third wave wraps it up.

As the day comes to a close, Fubuki is left somber; however, the admiral takes time now to step in & reinvigorate Fubuki, sending her back to her fleet as they wind down from the day. Fubuki really idolizes Akagi & wants to be her escort.

The episode composition is an info-dump

Gosei is read by Mdm Sakakibara (?)

Mutsuki implies that there are multiple bases

Naka is advertising her first live

The CM outro is a Shibafu Fubuki illustration

Most duties are handled by the Secretary Ship

Etch our victory into the sunrise!

Only Kongou is Kai Ni.

Arrows transmogrify in a yellow aura after shooting into aircraft

The basic Kongou Class armaments can fire in the X-form or compact form.

Plain Fubuki confirmed~ by all she encounters~

A snazzy launch sequence that is similar to Bubblegum Crash & Starcraft, among others.

Fairies are in the planes rather than on. It's possibly the same for equipment.

Due to clearing the sea around Naval district, perhaps Anchorage Hime will be the new boss of World 1 or just World 1-1? Hard Mode coming soonTM? 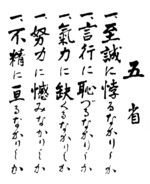 Communications are handled as such

Naval base from the sea

The dock in use

Three fleets at the port

A Type 21 Zero Fighter does the unimaginable

Did they think they could challenge the mighty Ikazuchi?.... unless it's this

Teitoku's only image
Retrieved from "https://kancolle.fandom.com/wiki/Anime/Episodes/Hajimemashite!_Shireikan!?oldid=1088137"
Community content is available under CC-BY-SA unless otherwise noted.