The largest and most powerful ship gun ever built, developed confidentially at Kure Naval Arsenal Gunnery.
This gun was able to outrange enemy battleships with a firing range of over 40 km, dubbed as 16 inch guns officially for secrecy.
Also able to carry out strong anti-air firing with the "Type 3 Shell".

Officially the largest caliber guns ever equipped on warships. In the real world, it was purpose-built and equipped only on the Yamato-class, but in the KanColle world, even the Kongou-class can carry this (but will suffer accuracy penalties). After the war, the technology used to rotate this turret was applied to the mechanics of a revolving restaurant on top of Hotel New Otani. The lathe used to machine the barrel of 46 cm guns are still active today at Kure. 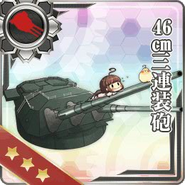 Old fairy
Add a photo to this gallery

Retrieved from "https://kancolle.fandom.com/wiki/46cm_Triple_Gun_Mount?oldid=1077228"
Community content is available under CC-BY-SA unless otherwise noted.