The first purely domestically produced battleship gun was developed at Kure Naval Yard Gunnery Division.
Calibered at 41 cm, which slightly exceeds 16 in (40.6 cm), it was the largest battleship gun until Yamato-class' 46 cm gun.
Nagato and Mutsu, being equipped with this gun, were well-known nationally as members of the World's Big Seven.

Developed for the IJN's 'Eight-Eight Fleet Program' in 1914, in which Japan initially intended to build eight battleships and eight battlecruisers. The Washington Naval Treaty of 1922 scrapped the various plans for other ships (Tosa, Kii and Amagi classes) to carry this gun, leaving the Nagato-class as the sole class. The gun was also deployed in three coast-defense turrets intended to close off the Strait of Tsushima. One turret each was deployed on Iki and Tsushima Islands while the third was mounted in Pusan, Korea. 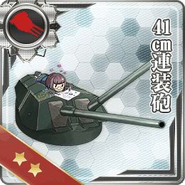