A standard main gun for battleships.
Ordered to Britain at the same time with Kongou class, and was later localized and served as battleship's armament until Ise class.
A must-have item for long range fleet battle.

Originally being the 14 inch guns produced by Vickers, Japanese Navy localized the gun under licensing and was equipped on some of the earliest battleships of Japan, namedly Fusou, Kongou and Ise classes. The final main gun firing of Japanese Navy during the war was recorded by this gun during Kure air raid in July 1945, where agrounded Ise, Hyuuga and Haruna fired anti-air shots with their main guns. Constantly modified and modernized throughout its lifespan, this is the very weapon that witnessed Japanese Navy's rise and fall. 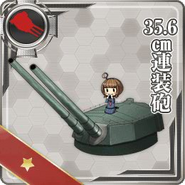