A late variant of the standard high-angle AA gun.
Its structure is very economically efficient, enabling it to be easily mass-produced. It also boasts outstanding performance for a dual gun. Improved areas include turning speed, which was one of the weapon design challenges. Its anti-aircraft fire capabilities can now be relied on.

This naval gun, known as the Type 89, was the first purpose-built Japanese AA weapon and was used in twin mountings on most World War II warships of cruiser size and larger, as well as on small destroyers and some auxiliaries. The Type 89 was also used to replace many of the 12cm Single High-angle Guns 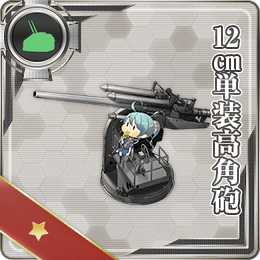 on older cruisers and battleships.

The Japanese considered the Type 89 to be a good AA weapon, and it had a fast rate of fire and excellent elevation and training speeds on the later models. Its primary shortcoming was a relatively low muzzle velocity, giving it a short range and low AA ceiling. It used a spring rammer cocked by the recoil, similar to other Japanese AA weaponry.